Two years and two weeks ago I made my blog and home page available via HTTPS following a slightly arduous and manual process. Today I automated deployment of Let's Encrypt SSL certificates on my Fort Collins Trails Status site using Certbot and 10 lines of Ansible configuration. We've come a long way in 2 years.

I've been parenting solo for 9 of the last 10 days and am too worn out to write much of anything other than damn, I'm glad Ruth is back, and that I'm grateful for the roof over our heads, the help of friends, the patience of coworkers, and the money to afford pizza when I can't cook anything from scratch. I'm humbled to think of people who are raising families alone in poverty, or on the road, suffering from discrimination, illness, or other troubles. Unlike them, I get to do this in easy mode.

Cool, @QGIS can copy features to the clipboard as GeoJSON - even converts coordinates to WGS84 for you! (Settings→Options→Data Sources) pic.twitter.com/igLdEiA8yr

I'm in the midst of training myself to automatically use pbcopy and pbpaste on my Mac command line and have yet another example of how readily GeoJSON travels. After exporting GeoJSON from QGIS to your Mac's clipboard or paste buffer, you could also send it directly to http://geojson.io using either the Node.js geojsonio-cli or Python geojsonio – by Jacob Wasserman, with additional Pandas and Jupyter integration features, a must-have Python module for my line of work – packages:

From your Qt GUI to the operating system clipboard, to the command line, to the web, and back to another GUI in your browser. As I keep saying, GeoJSON was never about replacing shapefiles in traditional GIS workflows; the format was intended to afford new methods and new workflows not easy or not possible with shapefiles and databases.

I'm locally famous for not engaging with Halloween, but am making an exception for my team. 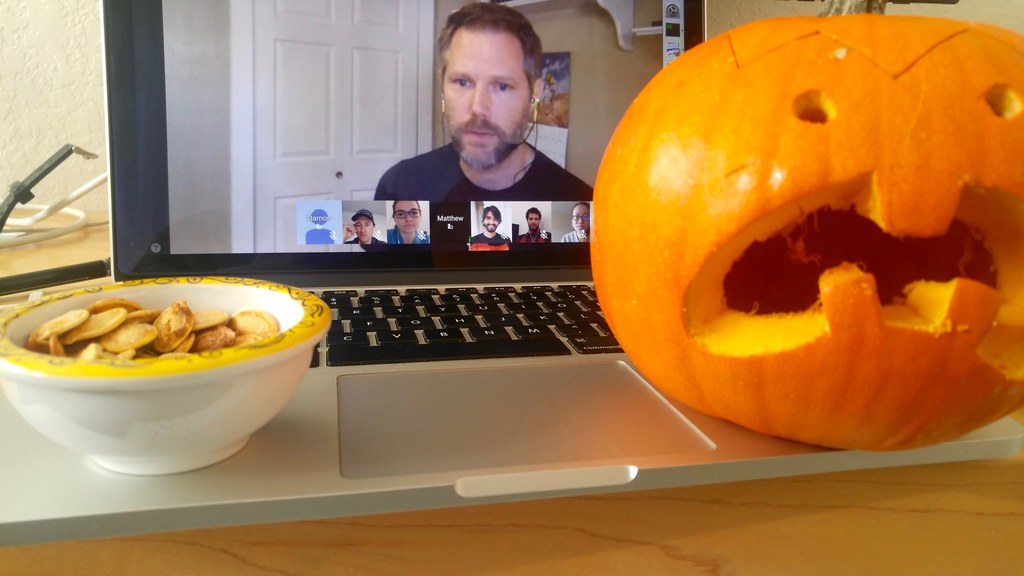 My kids, who had not much of a Halloween last year in France, are super excited about running around in costumes and extracting candy from the neighbors tonight.

I've woken up from my Nightmare on C++ Street and have uploaded new Rasterio, Fiona, and Shapely macosx wheels to PyPI. Use the pip requirement specs below to get the latest and greatest compatible wheels. 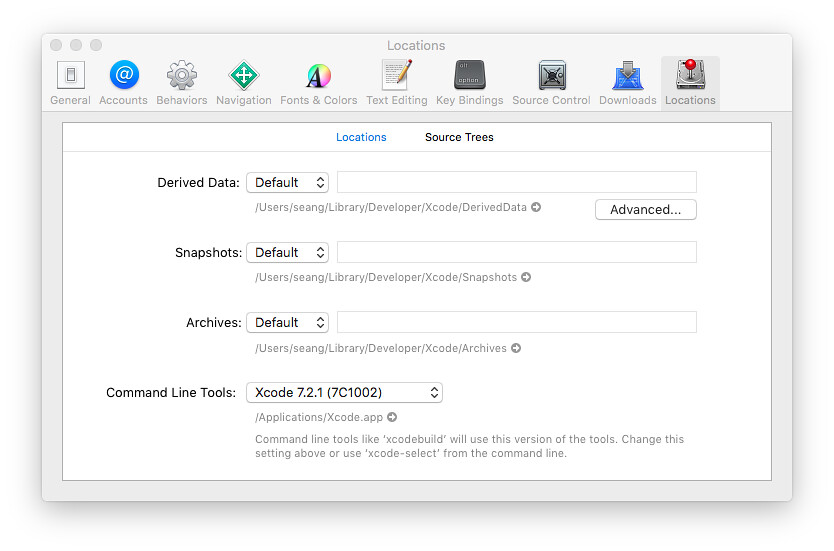 On my work computer, where I've been building the wheels, I somehow ended up with Xcode 8.2.1 and version 9.0.0 of the command line tools. I've never even seen this preference before, but do remember accepting a command line tools upgrade from Apple's App Store a while back. Reverting to command line tools version 8.2.1 cleared up the segmentation faults reported and studied in https://github.com/sgillies/frs-wheel-builds/issues/20.

I hope this blog post finds the next person to trip over this Xcode and command line tools mis-configuration.

Now I'm going to go back into PyPI and remove the broken binary wheels for older versions, leaving only the source distributions.

Ruth is in D.C. this week and I'm parenting solo and spinning up a new project at work. On top of this, I've got a cold. To recover and keep it all together I'm going to be eating all the Halloween candy and going to sleep earlier, which means less time online in the evenings this week. Apologies in advance for my delayed attention to emails, pull requests, &c.

Today my kids played the last games of their 8-week season. I enjoyed watching them and their buddies play, but I'm also happy to get my Saturdays back.

I didn't coach this season. I did help by playing the role of team manager and custodian of the all-important snack schedule for my oldest's U12 team. I made a spreadsheet, emailed reminders on Thursdays, bought her coach a gift card and shook all the parents down for contributions. In my experience this is a job that's always been picked up by a player's mother, part of the semi-mandatory free labor we require from moms. As far as I know, I'm the first dad to ever do this.

My kids (girls, remember) were coached by women this year, a first for each of them. My oldest's coach was very experienced, my youngest's was in her first season. I hope they'll each return and that we'll see more women coaching youth soccer around here in the future.

On 2017-06-05 I began to use GDAL 2.2.0 in the Fiona binary wheels I upload to the Cheeseshop. I also changed the MACOSX_DEPLOYMENT_TARGET environment variable from 10.6 to 10.9 in order to get GDAL 2.2.0 to compile. This seems to be the cause of Shapely and Fiona wheel compatibility issues. Have I mentioned that I'm not completely competent at C++ on OS X? I'm not.

My co-worker Matt Perry provided a script that exposed this issue clearly and I bisected in Fiona and Shapely version space until I found the root of the problem.

Until I get new wheels on PyPI, here are the three coping strategies.

This is what I do in my Dockerfiles at work. This strategy requires the GDAL and GEOS libraries and headers to be pre-installed on your system, and also Numpy and Cython.

The issue affects Rasterio, too. Rasterio version 1.0a9 wheels should be safe with any version of Shapely.

I'll have an announcement about new wheels soon.

I've been using Runkeeper for the past two years, but am going to give Strava a try while I'm not training for anything in particular. The big difference between the two are Strava's segments and leader board.

I've made my first route during a lunchtime run yesterday: https://www.strava.com/routes/11012256.

I ran this route and segment with no thought to the leader board. Would I have run harder if I was aware of it going in? Maybe. Will I try to move up the board next time? I think so. I'm going to try to have a little fun with it, balanced by some critical reading about gamification.