Week eight was a rest week. Only four runs, none longer than 7.5 miles. I hope the small numbers this week don't come back to haunt me as I ramp up again.

I didn't sleep well this week and despite some good meals got into a poor mood by Friday. Hitting the trail both days this weekend lifted my spirits a lot. Unlike Boulder and Denver, Fort Collins got very little precipitation from Friday's snowstorm, so the trails were dry as usual. Today I ran to the summit of Arthur's Rock, which I usually pass by, during the only overcast hours of the day. 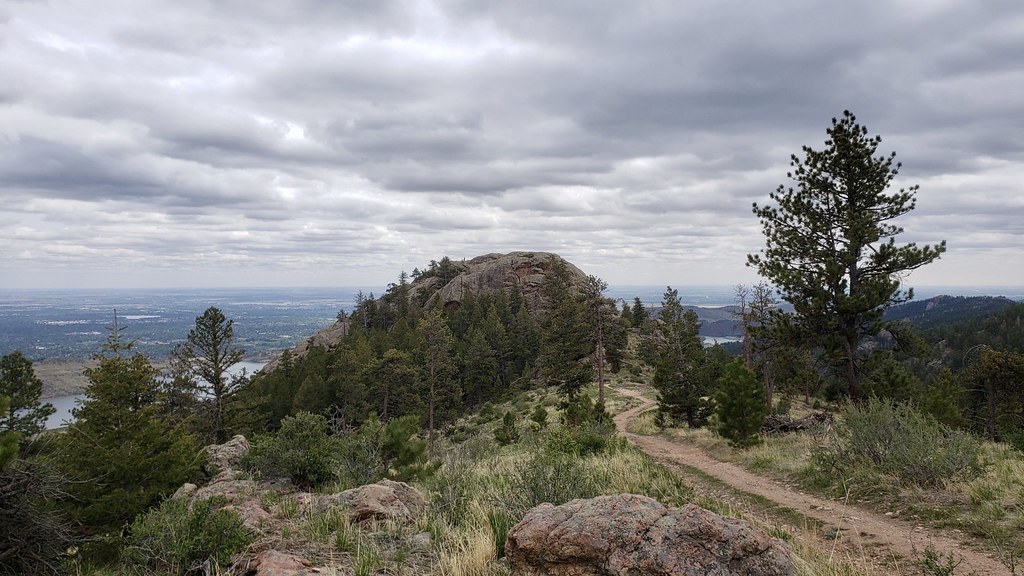 Arthur's Rock from the northwest 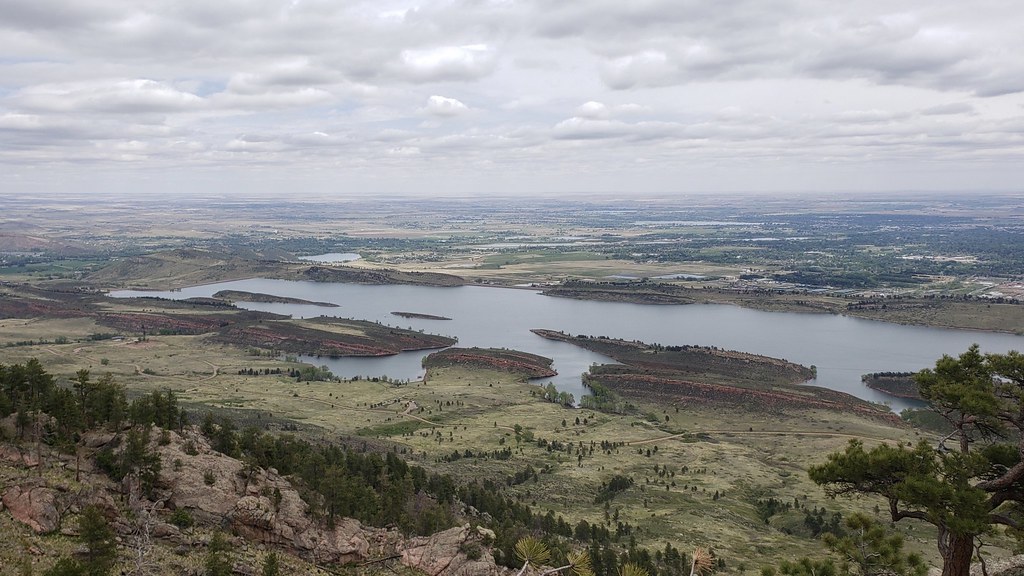 Looking northeast over Horsetooth Reservoir from the summit

Next week I'm doing my first uphill workout. My body felt good on the climb today and I'm looking forward to pushing it more on Tuesday.

I told my kids about my plans to become a part-time sandwich influencer and made crispy, not fried, chicken sandwiches for all three of us after my trail run. I love fried chicken, but I don't feel like becoming the owner of a jar of used oil right now, so I baked the chicken with a crispy coating on a sheet pan. The chicken was served hot, but was not Hot Chicken, not by a mile.

Each sandwich had one boneless, skinless chicken thigh at its core. I dredged the meat in a mixture of white flour, Kashmiri chile powder, and salt; dipped it egg white left over from making garlic aioli a couple days ago; then dredged it again in a mix of panko breadcrumbs, dried thyme, and olive oil. I baked these on a piece of parchment paper in my oven at 400 °F for 25 minutes.

While the chicken was baking, I sliced a small red onion and a large jalapeño, and made a small batch of coleslaw: thinly sliced green cabbage and grated carrot tossed with salt, caraway seeds, garlic aioli, yogurt, and rice wine vinegar. When the chicken was done, we put it on a basic hamburger bun and topped it with onion and coleslaw. I added a lot of fresh jalapeño, while the kids opted for sprinkling Cholula onto the crispy chicken. 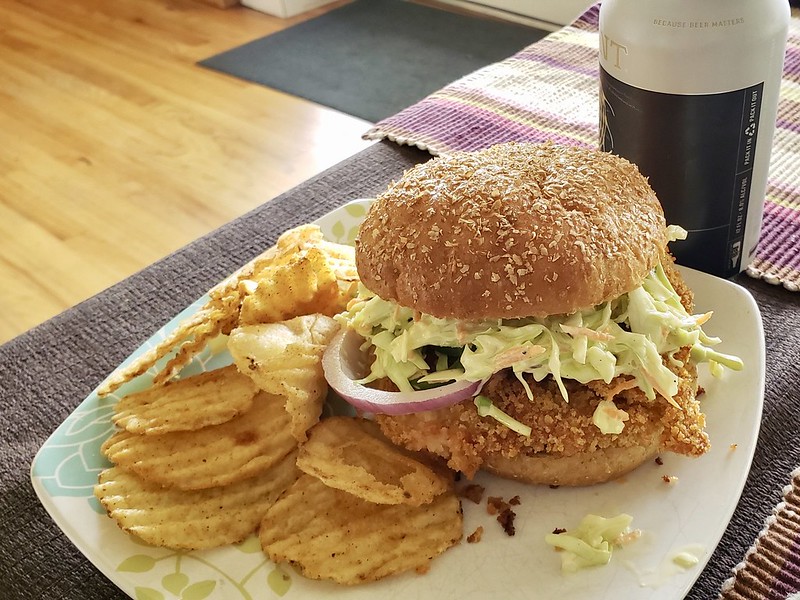 The sandwiches were delicious. The meat was thoroughly cooked, but still moist, and the coating had a nice crunch. We all agreed that we could have made the meat spicier by adding cayenne to the first dredging mix and to the crumbs. When I do this again, I might add apple to the coleslaw, making it more like the Bird's sweeter slaw.

While prepping, I listened to "Return to Hot Chicken" from Yo La Tengo's 1997 album I Can Hear The Heart Beating As One. There's a fun story about eating at Prince's Hot Chicken restaurant (and more) in an interview of James McNew by Aquarium Drunkard.

I didn't make a sandwich today, but I found another sandwich photo on my phone. This one is from January, when I was working through a large batch of homemade red cabbage (with apple and carrot) kimchi. 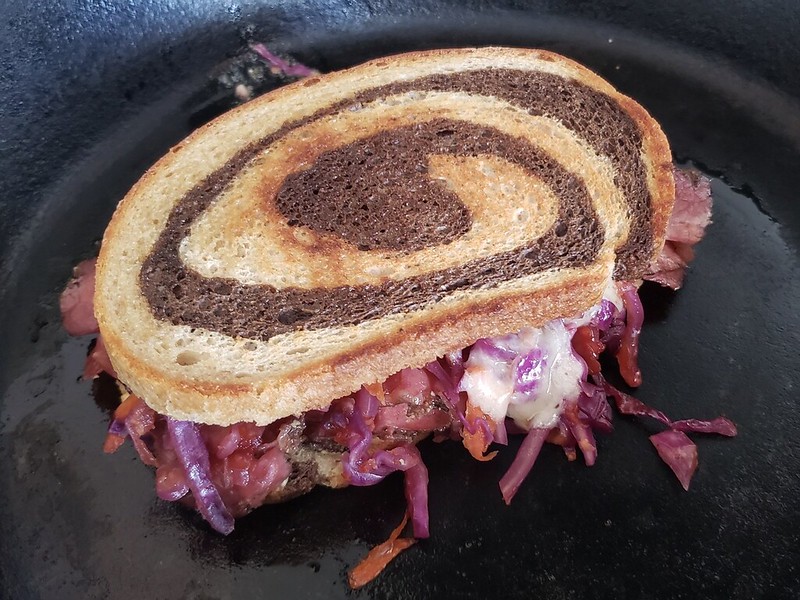 Ruth is traveling all next week and I will be busy holding down the fort and going to end-of-year school activities. Forgive me if I'm slow to reply to emails and open source issues and pull requests.

Here are the numbers for week seven.

Six days of running in a row, two speed workouts, and back-to-back weekend long runs. Next week is a rest week with less running and more biking, yoga, and weight lifting.

I stopped by King Soopers after my long run to get a few groceries. Do you ever, because you're ravenously hungry, buy things you didn't know you needed until you see them? I brought home some liverwurst and made a sandwich of it. 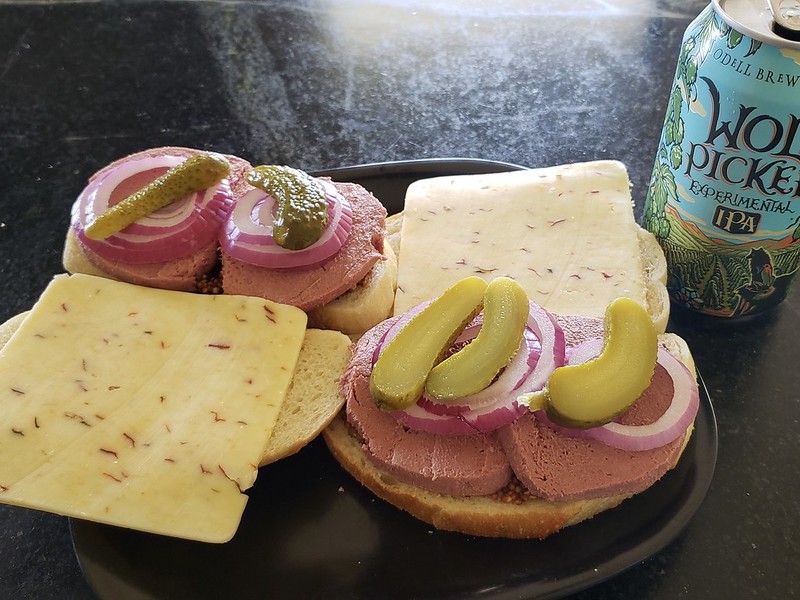 Eating this reminds me of driving from Logan (Utah) to Salt Lake City with my family to have Sunday dinners with my dad's parents and grandparents. The older Gillieses and Clines almost always had liverwurst and crackers for an appetizer. I don't remember ever disliking it.

Week six was a productive one with four days of running. One tough speed workout, a tempo run in the hills, and one long run along the first ridge on the east edge of the Rocky Mountains. Here are the numbers.

Saturday I helped at Quad Rock. I transported drop bags from the starting line to the Horsetooth aid station (miles 10 and 40) and then spent 12 hours at the aid station with a stint of watching a tricky trail intersection a mile upstream. 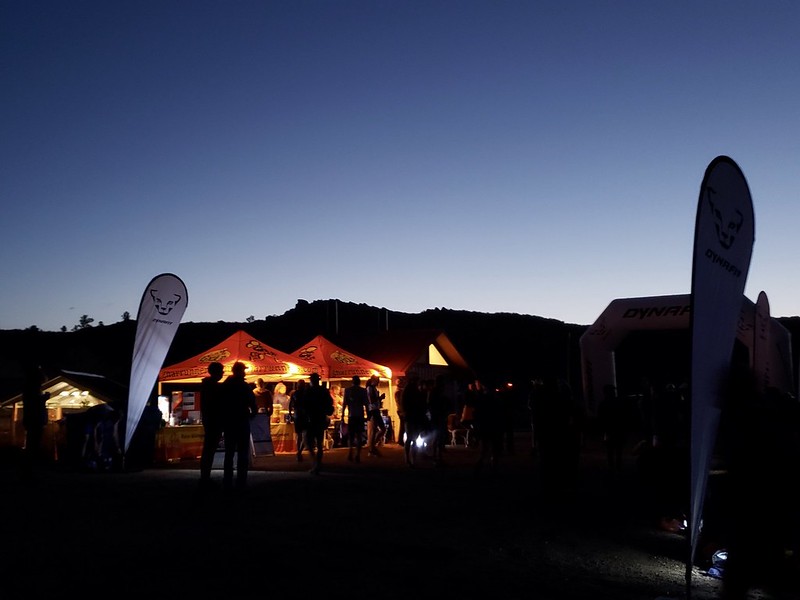 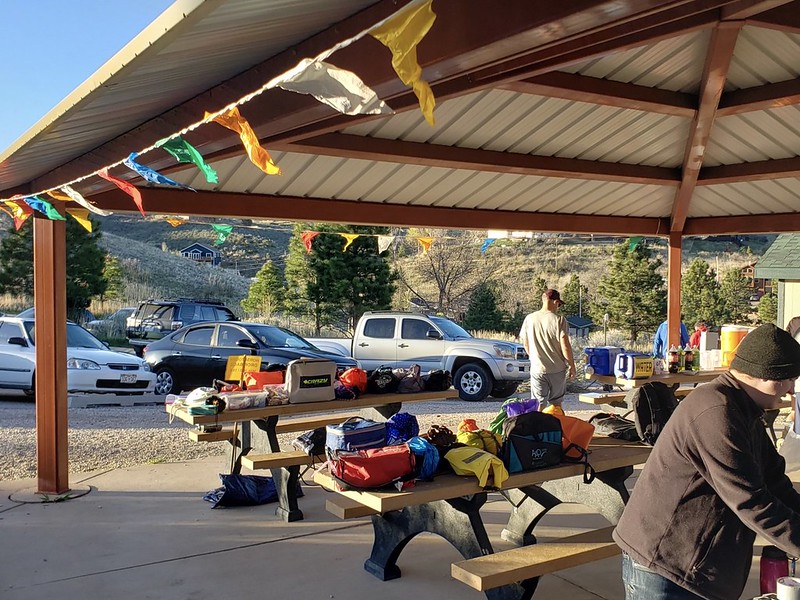 Mid-day it was warm, about 85° F (30° C). Every runner coming into the aid station a second time looked overheated to some degree, and still had one final climb to go with much of it in full sun. We cooled them down; put ice in water bottles, bandanas, hats; and handed out popsicles. It was super satisfying to see energy and smiles come back to the runners. According to OpenSplitTime, everyone who left our aid station finished. We had one person drop and 4 who didn't make the time cut.

After the trail sweepers came in from the previous station, I helped pack up, and then transported drop bags and the DNF runners to the finish.

Rain fell early Sunday. I waited for it to stop and then went out for an extremely easy 15-mile trail run bracketed by 3-mile bike rides from and to home. I saw lots of kids hiking with their moms. 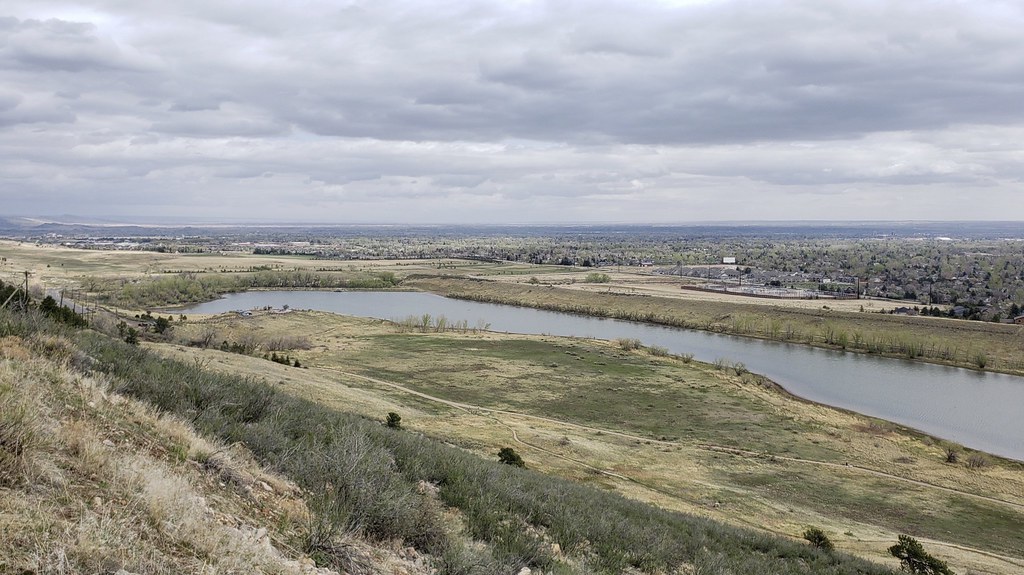 Finally a hint of green

Dry and windy weather continues here on Colorado's Front Range. I'm not a big fan of running in mud, but we really need some steady, soaking rain here. This dry and desiccating spring is unusual and is challenging our drought-tolerant environment. Many plants are still semi-dormant and the landscape is still mostly a midwinter yellow-brown color and flowers are slow to appear. One exception is the white blossom of the tough-as-nails sand lily (Leucocrinum montanum). This plant is in full bloom locally, as plentiful as ever. I was surprised to learn today that sand lilies are in the same family as asparagus. I saw one clematis blossom in a wetter spot this week, and a few bluebells here and there. In other years, these are erupting everywhere.

Here are the numbers for week five. Season highs all around. I'll go double this distance and 2.5 times the time and climbing one week in July.

Six days of running, my first substantial speed workout, and two runs with plenty of hills. I'm mostly hiking up the hills and trying to flow down them without braking. In a few weeks I'll start to push it more on the ascents. 5 minute uphill intervals with 1 minute of recovery do amazing things for my fitness.

Saturday, May 7, I will be volunteering all day for the Quad Rock race and will you see you if you pass through the Horsetooth aid station. It's at the 10 and 40 mile marks for the race courses. I'm looking forward to helping you 25 milers settle into the middle of your course and helping you 50 milers get the fuel and what you need for your finish.

I have the day off work today. After saying goodbye to my mother-in-law, who has been visiting, and making lunches for my kids, I drove to Lory State Park for a very nice, hilly trail run (7.75 miles, 1876 ft D+, average grade 4.4% including downhills). I listened to the new King Gizzard & the Lizard Wizard double album, Omnium Gatherum, on the drive and laughed out loud a few times. It's so good. And self-indulgent, which is exactly my mood today.

It's important to refuel after a hard run, so when I got home I made an extra loaded, extra buttery, grilled Cubano-ish sandwich. Did you know the Lucerne cheese company is selling ghost pepper jack? When I saw it in the store I had to grab it. Honestly, it could be hotter. 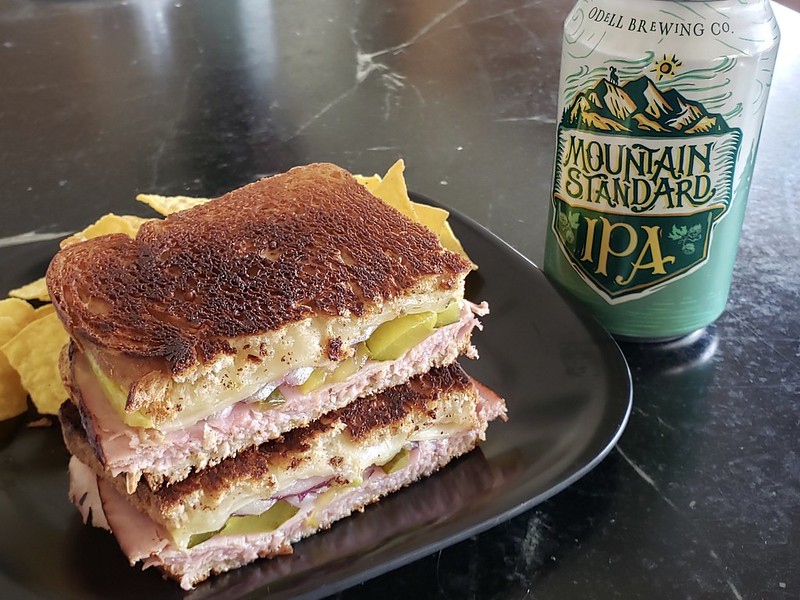 In week three I did six consecutive days of running. Track intervals on Wednesday. Singletrack tempo on Thursday. Back-to-back 2+ hour runs Saturday and Sunday. The weather was cool and windy and I fought with a sinus infection for motivation. Happily, 30 minutes of running never failed to make me feel better.

Half of my week four training was in San Francisco. Tuesday I went along the Embarcadero and up the Filbert Steps to the Coit Tower on Telegraph Hill. Wednesday I went to Christmas Tree Point on the north summit (922 ft) of the Twin Peaks via Corona Heights. 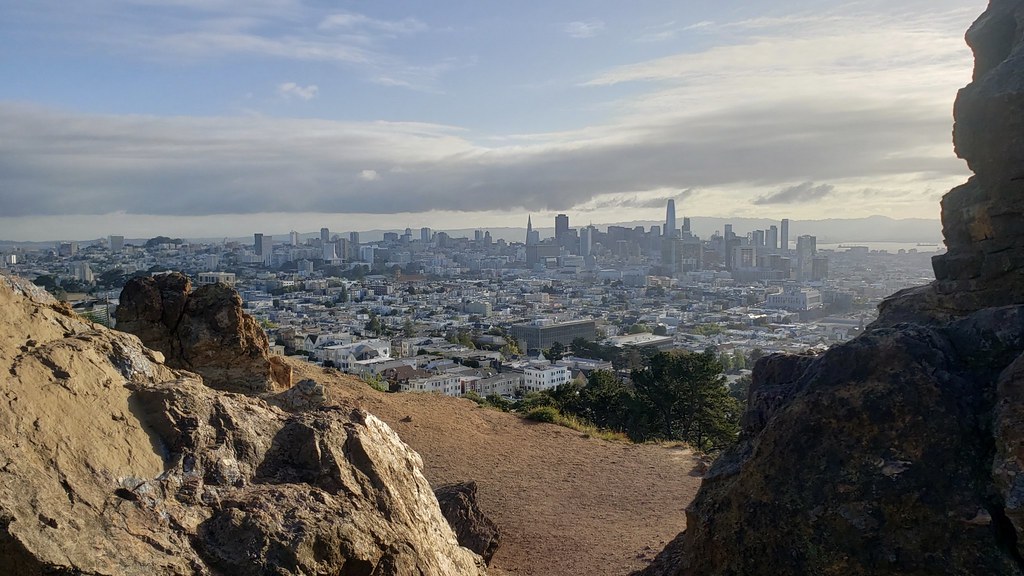 The little peak of Corona Heights is made out of chert, a dense and glassy rock. A quarry has uncovered an unusually large section of rock polished by fault motion. Geologists call this a slickenside. I saw a coyote at the base of the hill. I've seen signs warning about them around the city before, but this was the first time I've seen a coyote in San Francisco. Tom MacWright gave Corona Heights a 5 for its views. The view of the city and bay is great, but there's no view of the ocean, so I might give it a 4.8.

I concur with Tom's 6/5 score for running at Twin Peaks. The access from the north, at least, is still car free. There's a longish 8% grade that is super satisfying to finish. I try to make it up there every time I visit San Francisco.