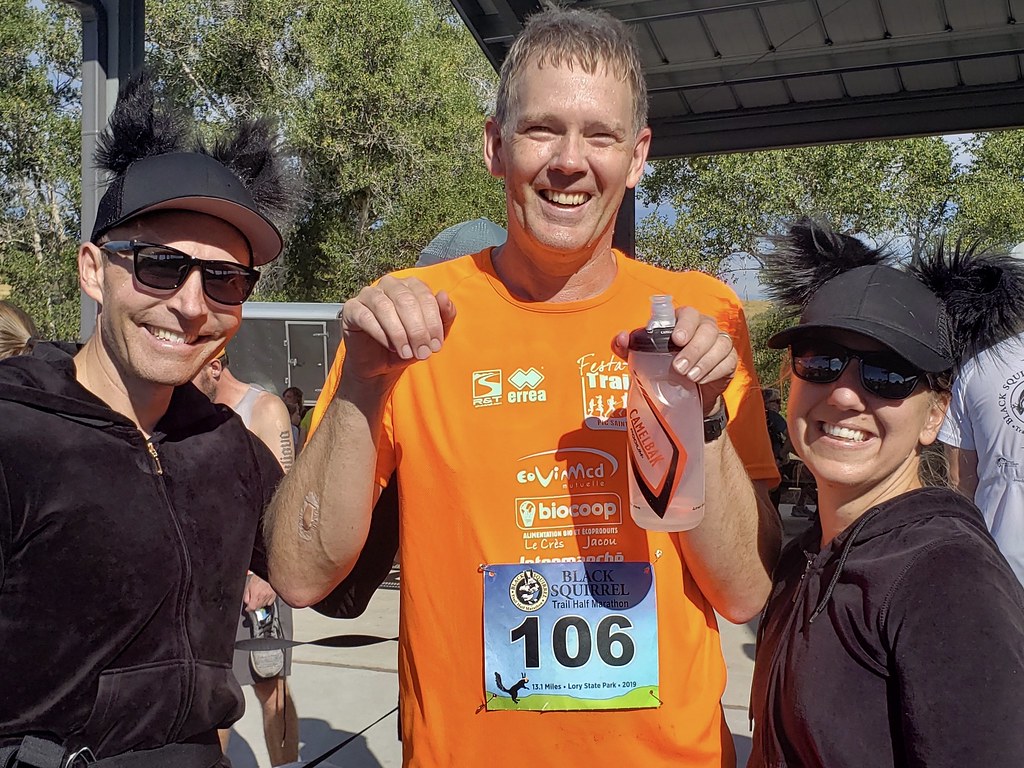 The black Abert's Squirrel is very shy, but I got a couple to pose with me. Photo by Ed Delosh, who was first in my age group.

There are four parts to the Black Squirrel course: a one mile preamble on a dirt road, a 4.5 mile climb on mostly single track and some fire road, a 3 mile single track descent, and 4.6 miles of rolling valley single track. I did the first mile in 8 and a half minutes, the climb and descent in one hour and 22 minutes, and the valley trails in 47 minutes. I feel good about how I did on the first 3 parts.

I struggled on the valley trail. It was hot and humid and my pace crashed whenever the trail tilted upwards even the slightest. I hiked some of it. As in 2015, I was passed by at least a dozen runners. I would love to figure out how to run the valley trails at faster than 9 minutes per mile, which would shave 5+ minutes off my time for next year.

I've been recording my runs on a Garmin Forerunner 35 since the beginning of the year. The data says that I ran the up and down parts of the race 5 minutes and 30 seconds faster than on a July 21 training run. Did I go too hard and leave nothing for the finish? The data says that I ran the final 2.2 miles ("Lory - East Valley Trail" segment on Strava) 40 seconds slower than on July 21. Let's say I lost another minute on the 2.5 miles between that segment and the end of the descent. That would be 1:40 lost on the flat, but 5:30 gained on the mountain. I think I made the right choice for this race. I haven't been running fast enough on that kind of rolling, slightly downhill, terrain to make up for time that I could have conceded on the climb or descent. For next year, I think I must to do a few more summer speed workouts and build more muscle if I'm going to improve on this year's result. Cooler weather would help, too. Roughly half of top finishers were 4-5 minutes slower than last year, and I heard other people acknowledge feeling the heat toward the finish.

The first male finisher was Nathan Austin in 1:38:30 and the first woman to finish was Rachael Rudel in 1:42:35 (8th overall). That's a new course record for women. All the results can be found at the event's web site: http://gnarrunners.com/black-squirrel-half/.

See you all next year!