We spent the first week of winter break with friends in Bessède-de-Sault, a little village of 50 people on a small plateau in the foothills of the Pyrénées. There's not much going on in the village other than a couple dairy cow operations, sheep herding, and vacation homes. There's not even a tabac or boulangerie. The closest stores are in Axat, 15 km down the Aude River gorge, or Mijanès, 15 km up at the head of the valley. Our friends restored a old house 40 years ago and have been spending summers and winter vacations here ever since. 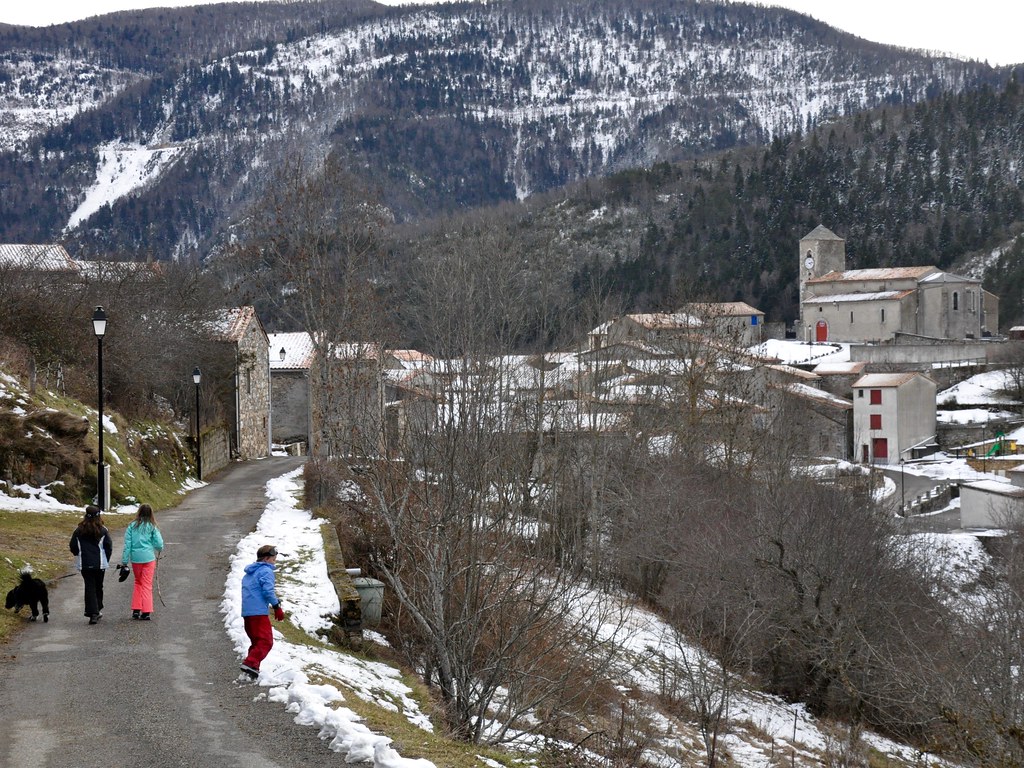 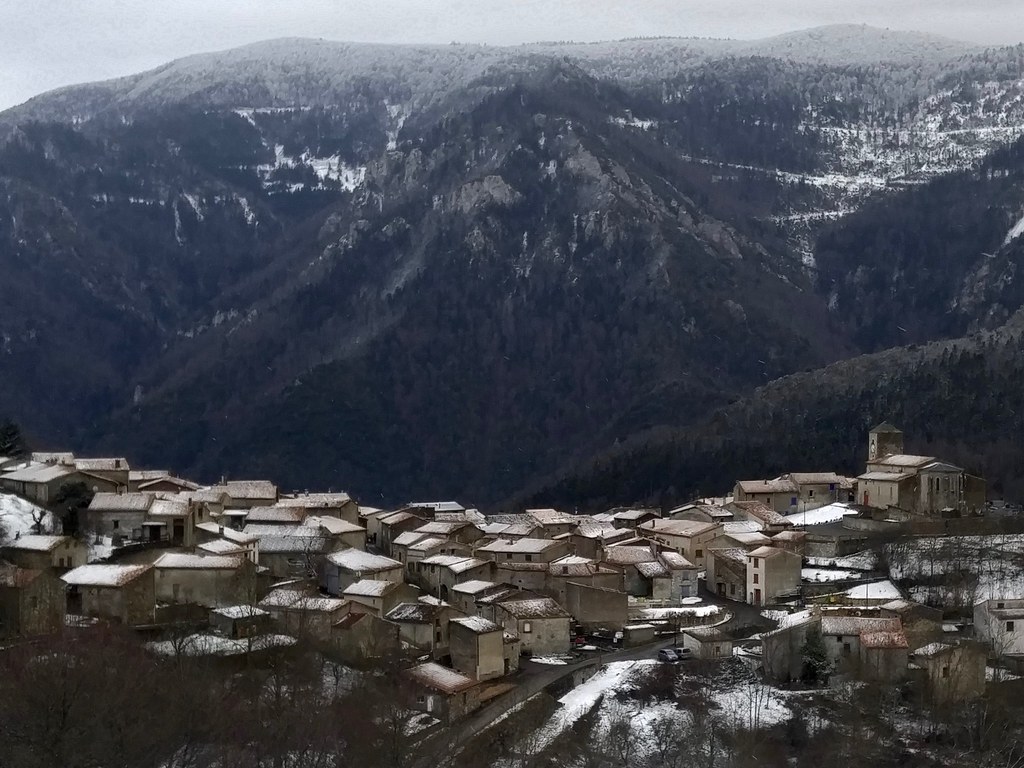 I went for several long runs in the snow. The forest here at 900-1500 meters elevation is a mix of evergreen and deciduous trees. Empty chestnut husks still cling to the trees in, giving the mountainsides a distinct ruddy color. 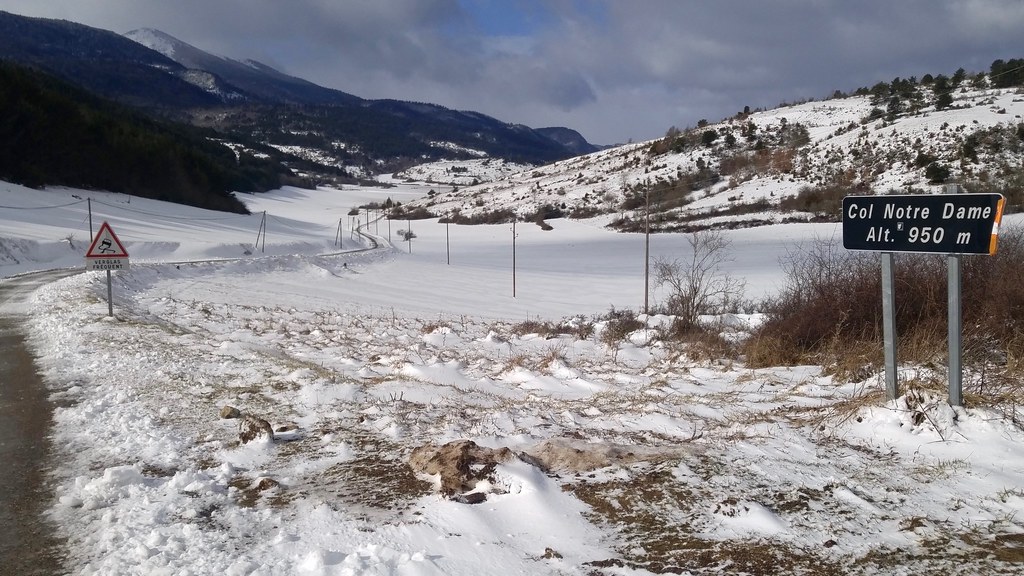 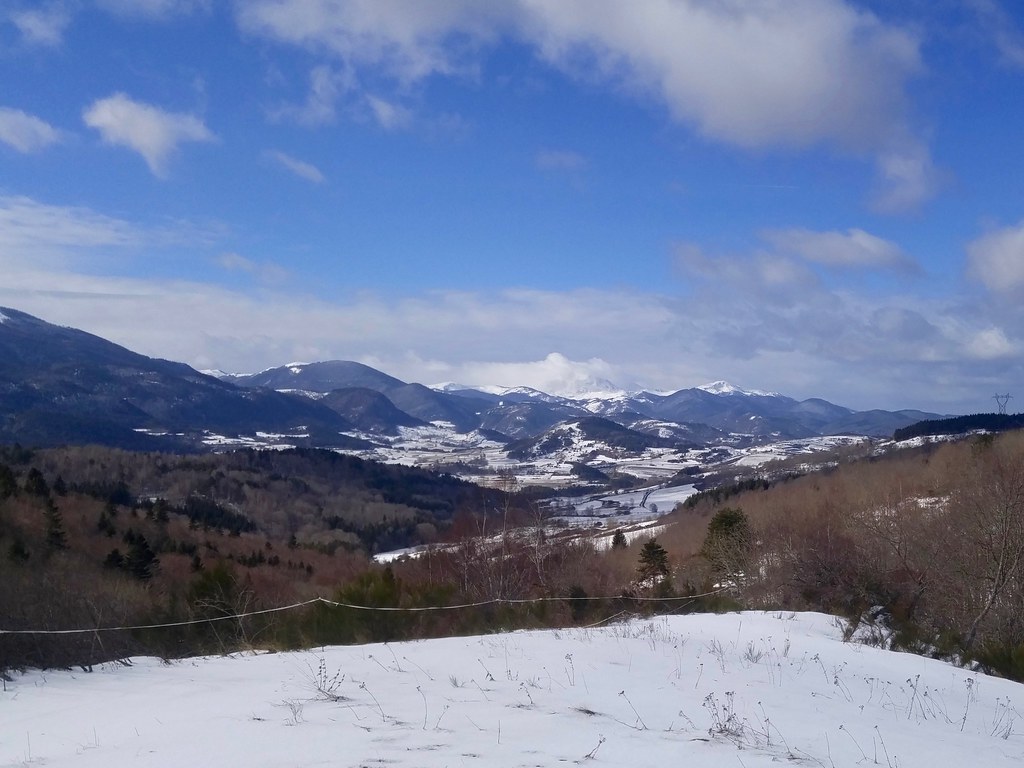 Spring is yet a few months away in the Pays de Sault. The brightest colors I saw in the woods was this abundant yellow-green lichen. 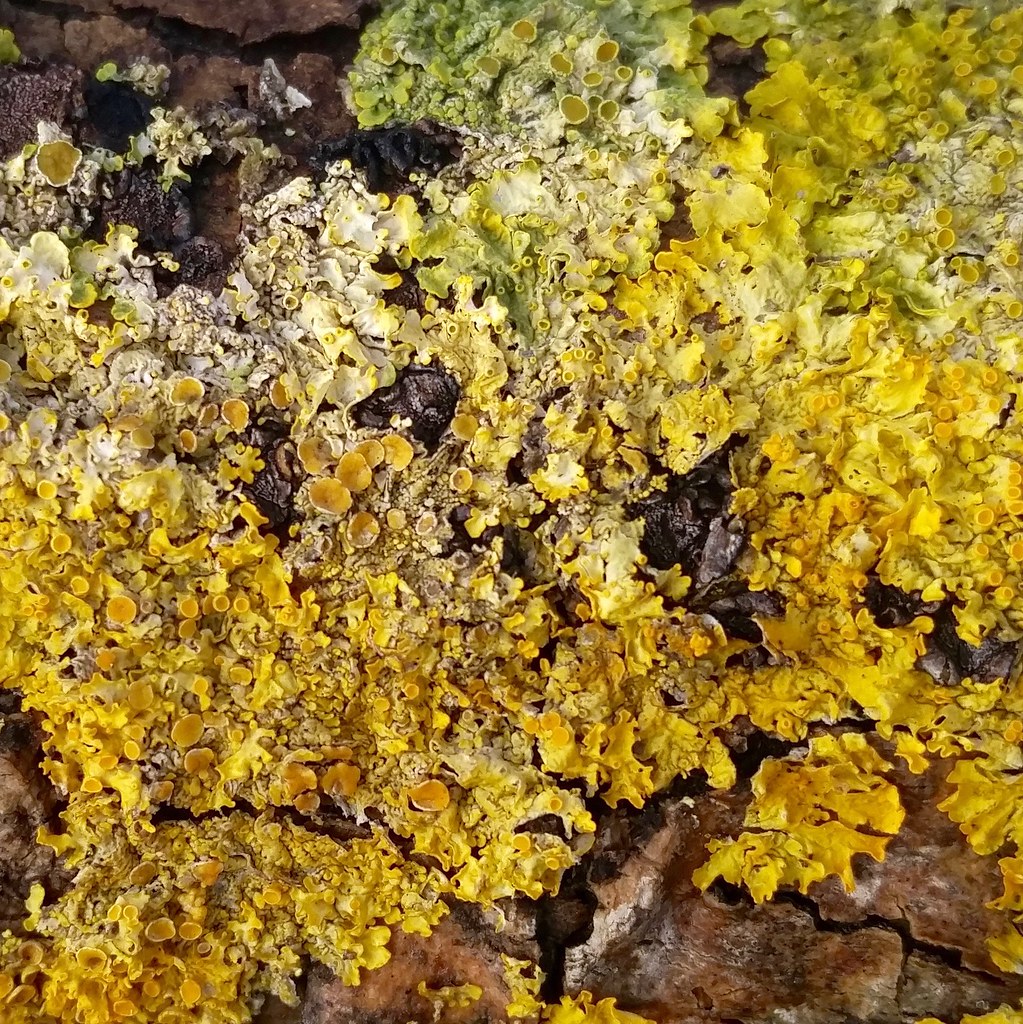 We skied 3 days at Mijanès-Donezan, a tiny ski station on the east side of the Col de Pailhères. It was like going back in time: Donezan has surface lifts only and a 3-day adult pass costs only €50. It's about the same size as Eldora's Challenge Mountain. One short surface lift, what French skiers call a tire-fesse, and then a longer one take skiers from the base at 1500 meters to 2000 meters on a shoulder of Pic de Canrusc (2133 m). We were lucky and had great conditions: 8" of fresh snow, followed by 3 days of sunny and mild weather.

This region is dotted with 11th and 12th century fortresses, remnants of the region's struggles against the Pope and Kind of France. This part of France might be Catalan or Spanish today if not for the defeat of the Count of Toulouse and the King of Aragon in 1213. Most Americans know very little about the Albigensian Crusade. This was a two decade program of Catharist Christian extermination carried out by the Roman Catholic church and its military allies, eventually including the King of France. Hundreds of thousands of people were condemned as heretics and murdered in this corner of France. 20,000 were massacred on 22 July 1209 during the Sack of Béziers.

Bessède-de-Sault is an hour and a half west of Perpignan and much of that road passes by and through fantastic limestone badlands. Here's a photo of the entrance to the Gorges de St Georges, just one of the many deep and narrow gorges in the area. 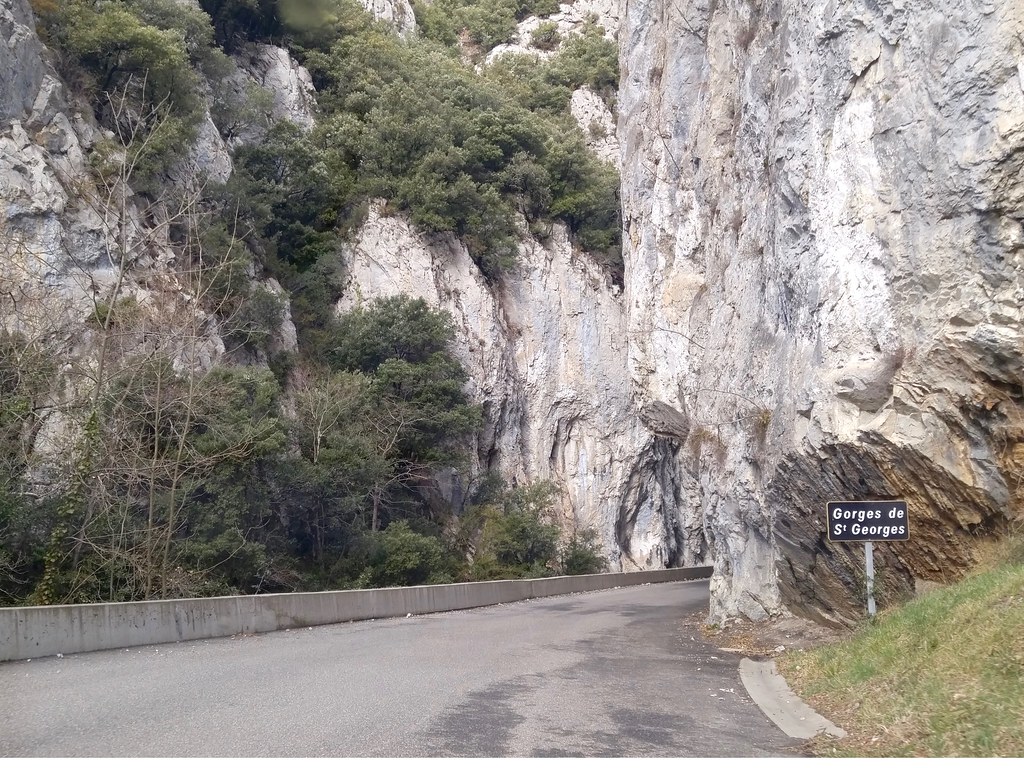 I'm coming back to the region at the end of March to run in a race at Quillan. The course goes up and over and around bluffs like these ones outside Maury. I'm hoping to do a little bit of wine tasting and shopping at Mas Amiel and other Maury vineyards on the way. I can hardly wait. 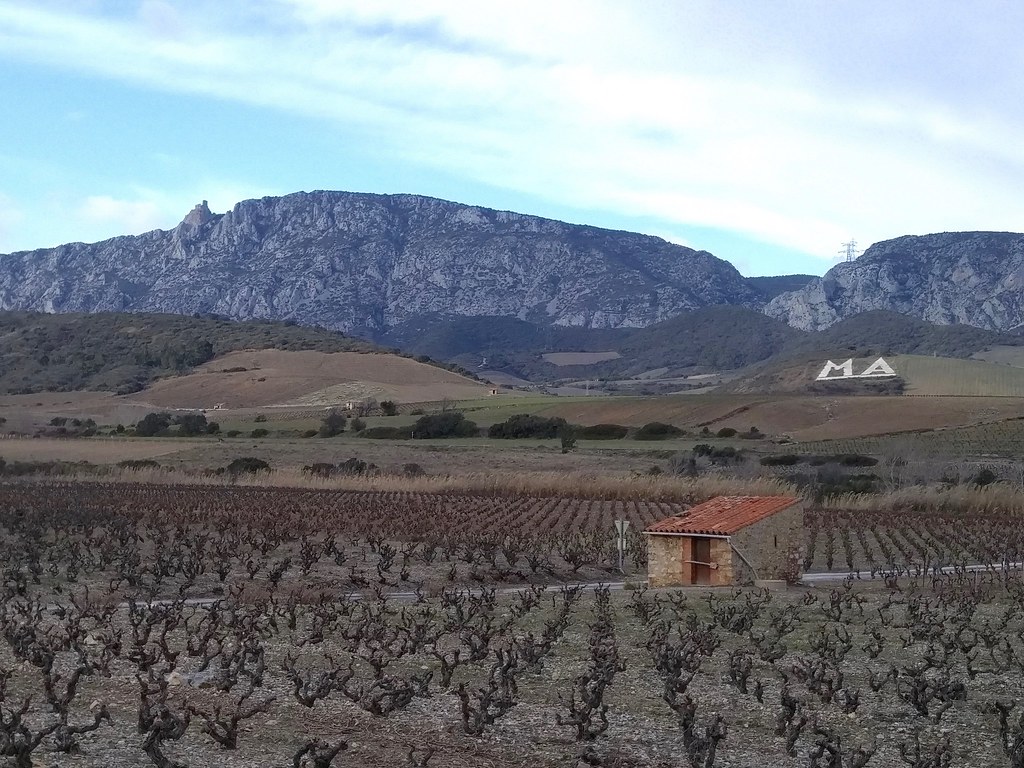 Dormant vineyards of Mas Amiel and if you look closely, the Chateau de Quéribus