Earlier this month, My family and I set off on a road trip through southeastern Utah and southwestern Colorado with friends from Montpellier, France. Our itinerary: Arches National Park, Mesa Verde National Park, Durango, Silverton, and Great Sand Dunes National Park. One of our friends had been to the United States twenty years ago, the other three, never. They spent a week in New York City before Ruth picked them up at Denver International Airport. We hit the road the next day, all 8 of us in a 2016 Honda Odyssey, loaded with optimism, good intentions, and Harry Potter audiobooks.

View from the 3rd row of our Honda Odyssey, leaving Fort Collins, CO

Configured for this road trip, our Odyssey has 3 rows of seats, 8 in all, with 31 cubic feet of cargo space. We had another 11 cubic feet in our ski carrier. This turned out to be completely adequate for 4 adults and 4 kids. We had enough room in back for a mid-sized cooler and bags. Outdoor gear like extra shoes, hats, picnic blankets, &c went up top. We soon settled on a formation of three kids in the back row, 2 adults and one kid in the second row, and 2 adults up front. Fully loaded like this, we got about 25 miles per gallon. When you multiply this by 8, 200 person-miles per gallon isn't bad mileage. The curb weight of the Odyssey is about 4500 pounds. Human weight was another 1000 pounds. And then we probably had another 200 pounds of gear, food, water, and ice. We've never asked so much of our car and it did fine. It affords good views, has a small sunroof, the seats are comfortable. The one drawback is that when it comes to listening to music or audiobooks, the occupants of the 3rd row seats depend on the speakers at the feet of their family in the 2nd row. In the 2nd you get blasted and in the 3rd it's not quite loud enough.

Much of the time on this trip we listened to Bernard Giraudeau read the first three Harry Potter novels. My French is just good enough to follow along and I loved having native French speakers along to explain the subtle details, such as that Giraudeau's impression of Gilderoy Lockhart used an obviously false Languedoc accent. It seemed a weird to me, too.

Our friends speak English as well as I speak French, but as their kids are beginners in English and Ruth, Arabelle, and Bea are quite fluent in French, we mainly used French. I spoke French every day of the trip, and not just with our friends: we were among French or French-Canadian tourists everywhere we went.

The drive from Fort Collins to Moab is long and we broke it up by stopping for a night in Glenwood Springs, a tourist town at the west end of a beautiful canyon. The next morning we stopped shortly after in Palisade to show our friends some orchards and buy fresh peaches and nectarines directly from the producers. Abundant sunshine, water from the Colorado River, and a relatively (for Colorado) frost-free microclimate make Palisade one of Colorado's best places to grow fruit. It's a location not unlike the Terasses du Larzac in the south of France, where cool air descending from the nearby cliffs keeps grapes from stewing in their skins after the sun goes down. 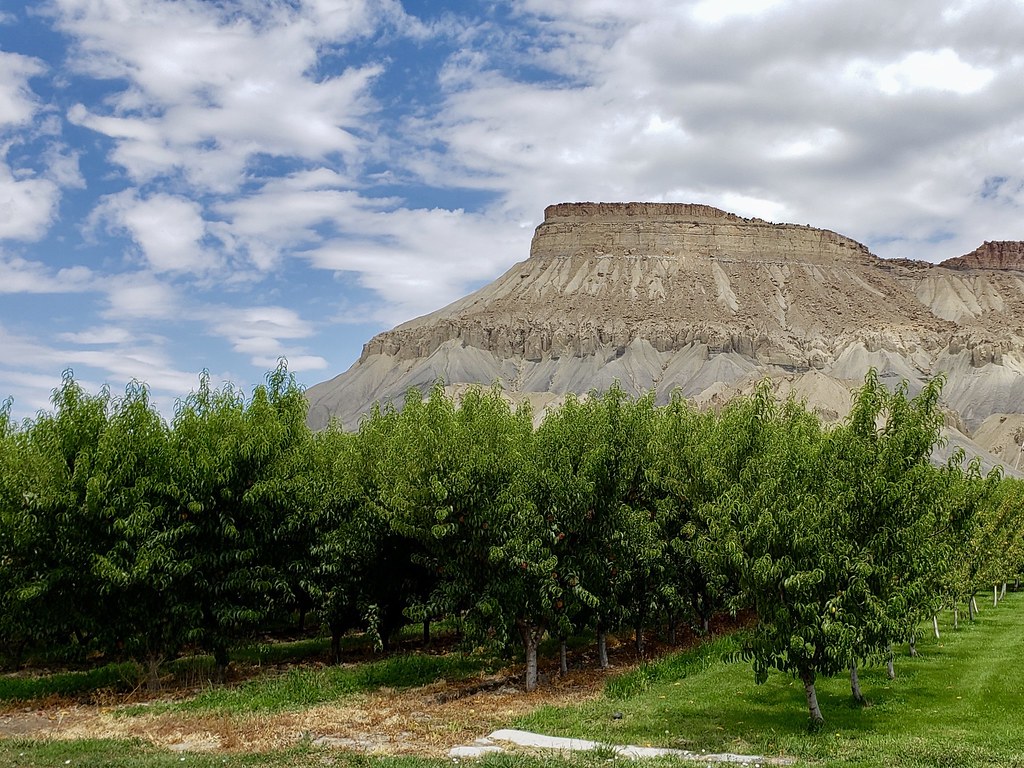 After leaving Palisade, Grand Junction, and Fruita behind we crossed into Utah and then left I-70 to take the scenic route along the Colorado River to Moab, Utah's State Route 128. We picnicked at the old Dewey Bridge site, stopped briefly at the base of the Fisher Towers, and enjoyed the rise of the canyon walls as we approached Moab. I hadn't been on SR-128 since 1992 and it was as beautiful as I remembered. Our friends were gobsmacked by the colors. I still am, and I've been exploring Southern Utah for fifty years. It's a uniquely beautiful part of the world.