Sète is southwest of Montpellier, at the foot of Mont St Clair, between the Étang de Thau (our largest coastal lagoon) and the Mediterranean Sea. It has an active fishing, recreation, and container port, France's second largest (after Marseille) on the Mediterranean. Montpellerians are very fond of Sète and laud its authentic character. It's a tourist destination that doesn't feel overrun by tourists. Certainly not on the day after Christmas, when we stopped in. 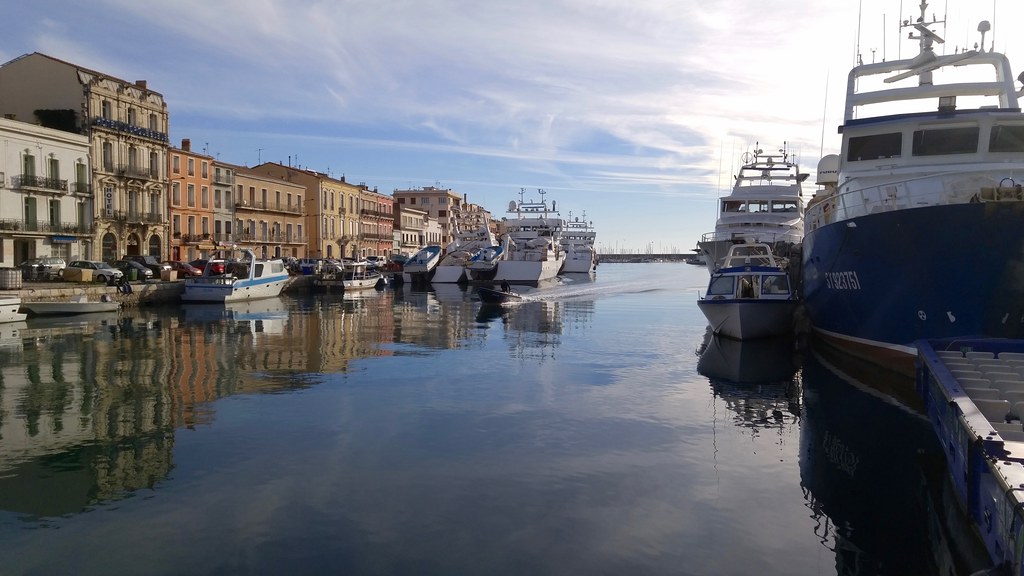 On the Quai Général Durand

Construction of the Port of Sète began in 1666 with funding and an edict from Louis XIV. The port was to be the southern terminus of the Canal du Midi, which gave France river and canal transport route between the Atlantic and Mediterranean, an interior route that didn't have to pass Spain. In a way it was a massive pipeline project, but for wheat, not oil. I hope that the Canal du Midi will be one of our future day trips. One can bike it using tow paths converted to paved or upaved cycling and hiking trails or go by commercial or personal boat. We passed it on the outskirts of Béziers on our train trip to Barcelona and, I read, it crosses the Orb river on a viaduct. Seeing a boat cross a river via bridge will be worth the trip. Maybe we'll be in the boat. 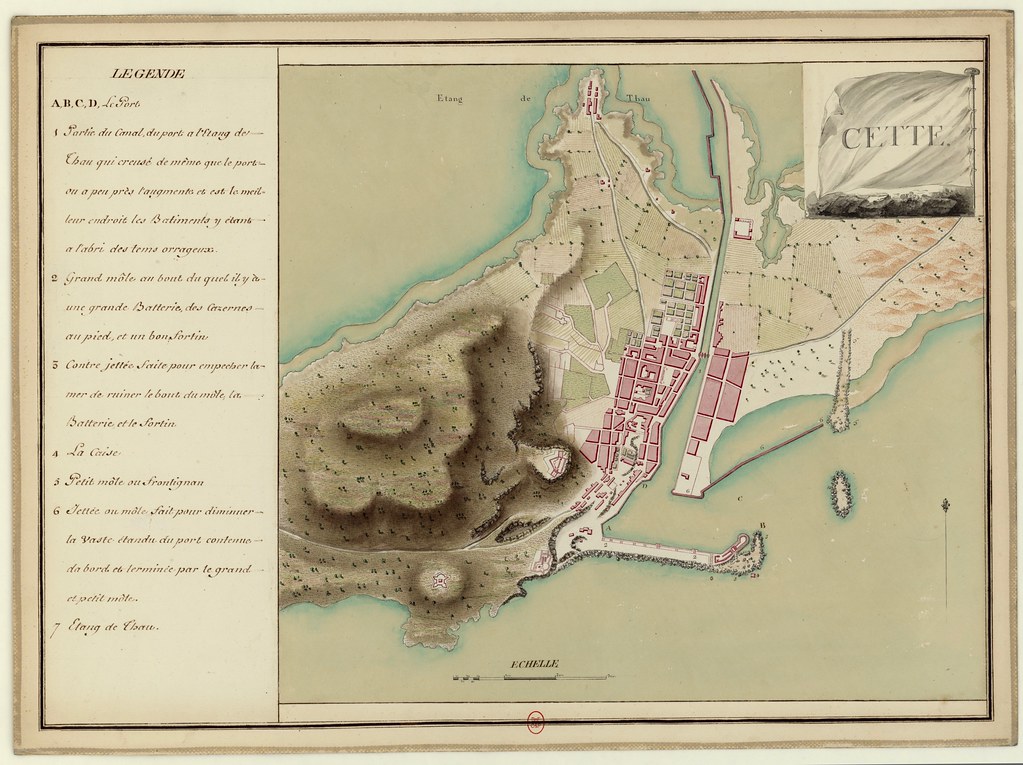 Boat tours of the Port de Sète depart from the original central quai shown in the map from 1777 above, just to the lower left of the bridge. These run regularly in warmer weather and the crew and boat come out of hibernation for a few runs during the Christmas break. Ruth called and found out that whether the tours are on or off depends on weather and the number of passengers. As it turned out, the weather was fine, the boat sold out, and the tour was on. We scored good seats on the top deck of the Aquarius, a bright red and yellow catamaran with underwater windows in each of its hulls.

The 17th century civil engineers who built the port did not make allowances for automobile parking garages, but one has been installed under the canal north of the quai. It boggled my land-lubber brain a bit to be parking under the water, but of course the canal itself is a rather shallow channel dug in the solid ground between the sea and the lagoon to the north. The parking is operated by Indigo, of course, an enterprise intent on monopolizing parking stations in France and running them fairly well with decent lighting and fresh paint and seasonal music. 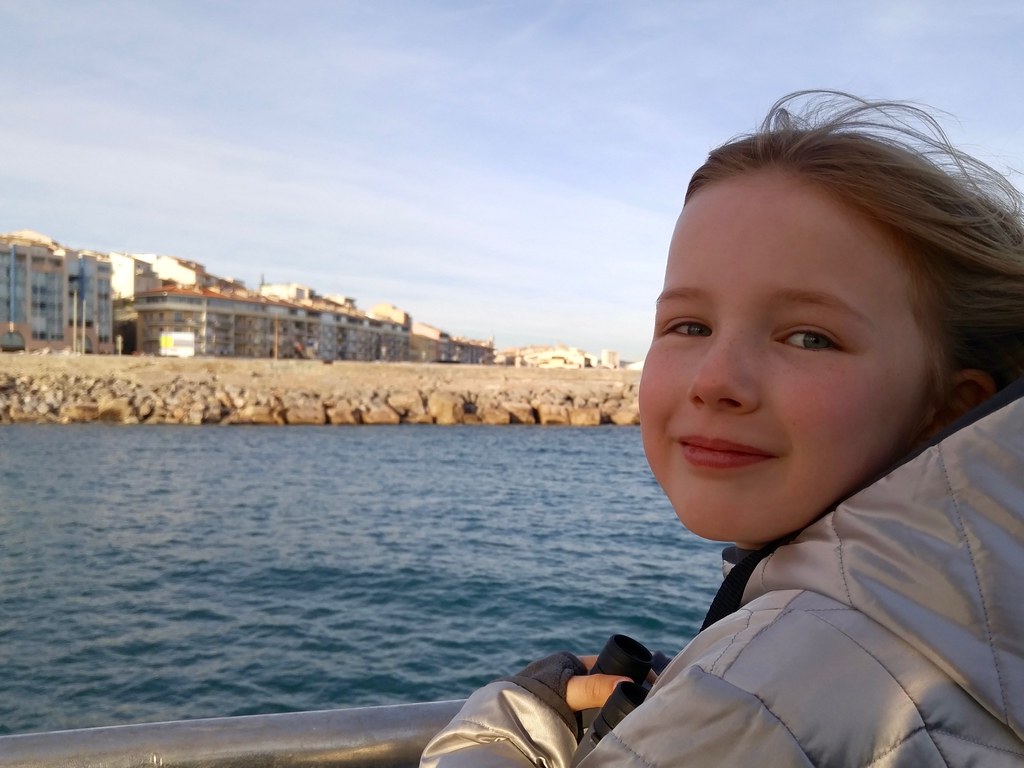 On board the Aquarius

The Aquarius slipped past the fishing fleet on the quai and then down the coast to the southwest, past the maritime cemetary, the amphitheatre, and to a rocky bank in shallow water where we were all invited to go below deck to peer out the underwater ports. We saw fish, though Dorade (Sea Bream) is the only species I remember. When the water is warmer, tourists sometimes see octopus on these tours.

On the way back from the rocks, the crew gave all the kids on board a tour of the wheelhouse. Bea blew the ship's horn and Arabelle got to handle the wheel. Meanwhile, the first mate entertained the adults with a variety of off-color nautical jokes.

The cruise finished with a very detailed tour of the most empty (Boxing Day, remember) port. There was one livestock freighter recently arrived from North Africa, and a wine tanker from Tangiers. We saw where the tugs and pilot boats were parked and then headed back to the quai with some jaunty song about cigales (cicadas) on the loudspeakers. We went to the nearest place, Les 2 Ramiers, for cafés and crêpes so loaded with Nutella that even Bea and Arabelle cried for mercy.

Too full to get in the car, we wandered a couple blocks to Place Léon Blum to see the famous octopus fountain. It's big and sprawling and I failed to capture it well with my phone's camera. 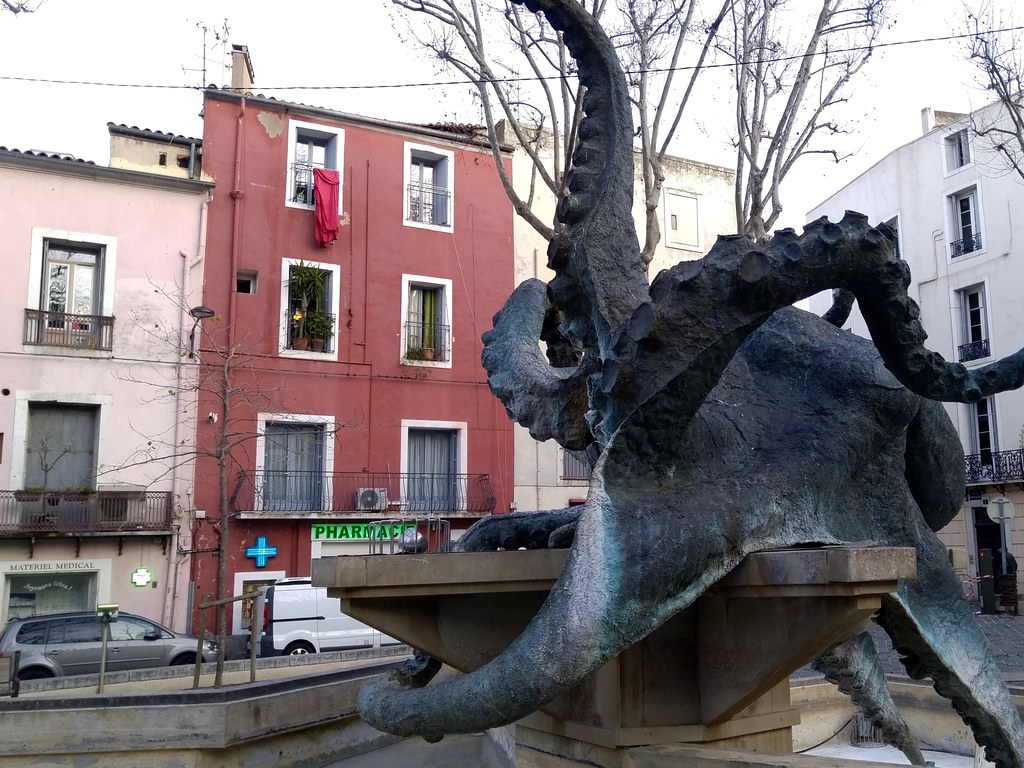 Octopus at the Fountain in Place Léon Blum

I'm looking forward to visiting Séte again before we leave France. Meanwhile, I've given myself a little homework: 1) figure out why Georges Brassens is such a big deal around here, and 2) watch Pépé le Moko, a prototypical film noir set in Sète.